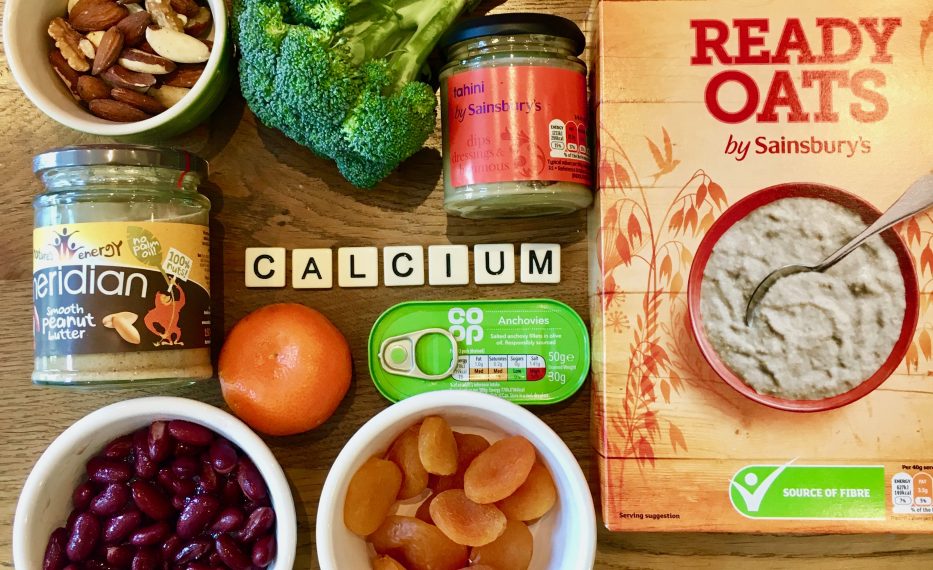 If your child has a cow’s milk protein allergy or your family is vegan and you are avoiding dairy products; you may be wondering…how can I make sure that my child is still receiving an adequate calcium intake?

This post is all about non-dairy sources of calcium and how to make sure your child has an adequate nutritional intake whilst following a dairy free diet. It is also very important to remember vitamin D as it aids the absorption of calcium. The UK Department of Health recommends that all children and infants under 5 years of age (except those drinking more than 500ml infant formula per day) should take a vitamin D supplement of 10 micrograms per day. Vitamin D drops are useful for babies and young children. Find out more information hereandhere

How much calcium do children need?

The table below is a guide to the UK recommended daily calcium intakes for babies, children and breastfeeding mums. 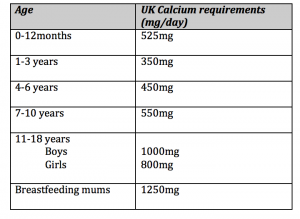 There are many non-dairy sources of calcium that are important for children who are avoiding dairy products. Besides the plant-based diary alternative drinks discussed in another post, there are plenty of non-dairy foods that contain significant sources of calcium. 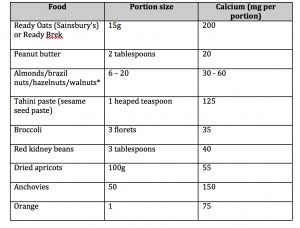 *Whole nuts are not appropriate for children less than 5 years of age, as they are a choking hazard but fine for older children

Due to high levels of oxalates, which inhibit the absorption of calcium, in some vegetables particularly spinach, rhubarb, beet greens and certain beans, it is not advisable to rely on vegetables aloneto meet your child’s calcium needs.

If you are concerned about your own or your child’s calcium intake, speak with your doctor or dietitian, as a calcium supplement may be appropriate.

Fortified soya products can be a useful way of achieving an adequate calcium intake for children following a dairy free diet. There are various milks, yoghurts and other products available. It is important to look for those fortified with calcium (organic varieties are not fortified) as soya does not naturally contain calcium.

If your child is between 6 and 12 months of age, you should use an infant formula to provide their nutritional needs. SMA Wysoy is (currently) the only soya-based infant formula available in the UK but it is not suitable for vegans due to the source of vitamin D from sheep’s wool. In the UK, soya infant formula is not recommended for infants under 6 months of age for 2 reasons (see below) unless advised by your healthcare provider (for instance as a treatment for a rare metabolic condition called Galactosaemia)

Soya formula has been used in the past for children with cow’s milk protein allergy (CMPA), but it is now recognized that 10-14% of children with “immediate-type” or IgE-mediated CMPA and up to 50% of children with “delayed” or non-IgE mediated CMPA also show an allergy to soya protein found in soya milk.  Therefore, soya formula is not recommended as a first line treatment for CMPA before the age of 6 months. Extensively hydrolysed formulae are available on prescription only and are the first line choice for the treatment of CMPA if an infant is not breastfeeding (in some cases an AAF may be recommended).

Soya is a rich source of phyto-oestrogens and these mimic sex hormones in the body. For older children and adults, some soya is not a problem, but for babies under 6 months who have soya protein based formula as their sole source of nutrition, current guidance in the UK is that the phyto-oestrogens in soya-based formula should be carefully considered as a risk. Some animal studies have shown an effect of phytoestrogens on fertility whereas a recent study (Sinai et al 2018 Eur J Nutr) showed no association of soy-based infant formula with early onset of puberty in children.

Soya for an older child

Beyond 6 months of age, soya products are thought to be safe as they provide a smaller amount of plant oestrogens per kilogram of body weight, as they are not the sole source of nutrition, which a soya formula would be (from birth to 6 months of age).

As an infant, and often up to the age of 18 months to 2 years, depending on their growth and nutritional needs, your child will be prescribed an extensively hydrolysed formula (EHF) or an amino acid formula (AAF). All of these formulae are fortified with calcium and the amounts range from 40mg to 94mg calcium per 100ml, depending on the brand. A Paediatric Dietitian can advise you on the appropriate type and volume of EHF or AAF for your baby.

After the age of 18 months to 2 years, there are many plant-based dairy alternatives available at supermarkets and health food shops. See my previous post to read about these “milks” in detail.

In a nutshell: Rice milk is not suitable for children under the age of 5 years due to the arsenic content and most other “milks” are very low in energy and protein (except soya milks) for young children. It’s also important to choose products fortified with calcium, vitamins and other minerals such as iodine.

There are also many non-dairy alternatives to yoghurt, which can be very helpful in meeting the calcium needs of young children.  For example, there are products based on soya, coconut and oats. Always make sure that the product is fortified with calcium and remember that organic varieties are not fortified. See the table below for further details of fortified products available in the supermarket.

*also fortified with vitamin D and B12

There are also additional brands such as Coyo, Coconut Collaborative, Nush and supermarket own brands, but they are not fortified with calcium. Let me know if you find any other new fortified products!