2. The low down on baby led weaning and spoon-feeding approaches… 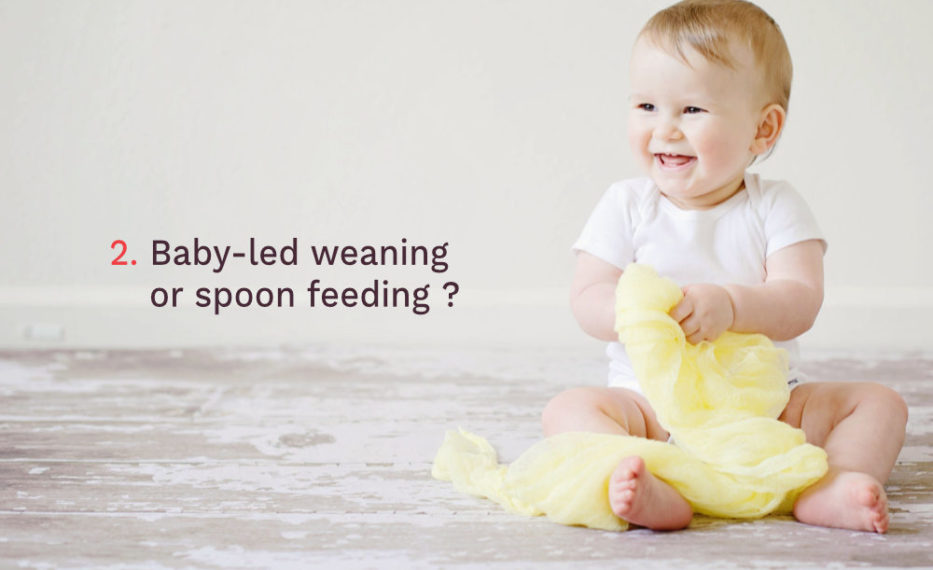 The low down on baby led weaning and spoon-feeding approaches…

What is baby led weaning?

Baby led weaning (BLW) is an approach for introducing solids to babies where the babies are allowed to feed themselves. Gill Rapley a health visitor in the UK first coined the term in 2008 and it has become hugely popular since then, especially here in the UK, Canada, New Zealand and Australia.

What is Spoon feeding or traditional feeding?

Is BLW appropriate for all babies?

The short answer is “NO” baby led weaning may not be appropriate for all babies. BLW is contraindicated for babies who are at risk of dysphagia (difficulty with swallowing) such as babies who have a cleft palate or tongue-tie, a neurological disorder such as developmental delay, hypotonia  (low muscle tone) and oral hypotonia or a genetic disorder. Speak with your baby’s Health Visitor or GP or Paediatrician first before you start introducing solids to your baby.

It is also advisable that a baby who is at risk of iron deficiency anaemia such as those born prematurely (before 36 weeks gestation), at a low birth weight (2500g or less), those born to a mum with iron deficiency anaemia or if you have concerns about your baby’s growth, is followed up by a Paediatrician and Paediatric Dietitian to ensure that they are meeting their iron requirements. A Paediatrician may decide to prescribe iron supplements in some cases.

What are the advantages of BLW?

Some research has shown that babies fed using the BLW approach are less likely to be fussy with foods later in life.

Other advantages could be that your baby eats the same food as the rest of the family (but be careful about added salt and sugar) and that he/she joins in family mealtimes (but these are both possible with a traditional weaning approach too!)

Which approach is best?

My feeling is that the most important thing is to feed your baby responsively, whether you choose to use purees from a spoon or baby led weaning. Feeding responsively means trying to “tune in” to your baby’s cues as to when they have had enough to eat. Your baby will give you clear signals that they have had enough to eat such as pushing your hand or the food away, turning their head away from a spoon, clamping their mouth shut or holding food in their mouth, saying “no” if they are old enough and spitting food out.

Don’t be tempted to try and give your baby “one more mouthful” of food if they are giving you these clear signals!

NOTE: If your baby is not gaining weight as expected or you are concerned about your baby’s growth at all, speak with your Health Visitor or GP in the first instance.

What is the best approach?

Are there any disadvantages of BLW?

Some people worry about choking but research has shown that there is no increased risk of choking with BLW compared to spoon feeding, as long as the appropriate SIZE and SHAPE* of foods is offered to your baby, there are no distractions and they are sitting upright and well supported.

*SIZE: the food should be about the size of an adult baby finger, so that your baby can pick up and hold the food in their fist with some of the food sticking out of their fist

*SHAPE: the food should be a long shape, such as your finger

BLISS study explained in more detail…
Baby led introduction to solids study (BLISS) was published in the British Medical Journal in May 2018, based on a population in New Zealand looking at a modified form of baby led weaning and the iron status of babies.

FINDINGS
The study found that there was no difference between groups in both iron intakes at 7 and 12 months; and iron status (Haemoglobin and ferritin) of the babies at 12 months. However, it must be pointed out that both groups had low dietary iron intakes (from complementary foods) at 7 months of age of 1.0mg and 1.2mg/day.